You are here: Home / Agriculture / Abnormally dry to drought conditions reported in 70 percent of Iowa 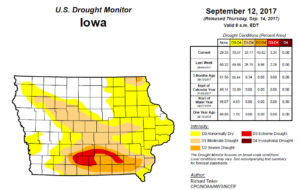 A new report shows the drought zone in Iowa has greatly expanded.

According to the U.S. Drought Monitor, 70 percent of Iowa is abnormally dry or in some form of drought. A week ago, the report indicated about half of Iowa in those conditions. The area of extreme drought has expanded as well. All or parts of seven counties in south central and southeast Iowa are now in extreme drought.

Rain is falling in parts of western Iowa this morning. More than three inches of rain falls, on average, in Iowa during the month of September. So far this month, there are significant sections of the state that have had no rain.

The Iowa DNR’s Tim Hall  monitors water conditions. “Boy, the southeast quarter of the state has note seen even half of its rainfall this year. It’s just been relay, really tough,” Halls says. That area of the state had gotten enough rain to wipe out what had been moderate drought conditions back in April — making it abnormally dry. Hall says things changed quickly after that.

“Drought has a way of kind of sneaking up on you,” he says, “one day you are not in a drought and then you wake up a week later and things are pretty dry. It’s been a tough year.” Hall says orther states have been even more starved for rain.

“It’s not any where near as bad as it was in 2012 and ’13. It’s pretty localized to that southern, southeast corner of the state,” according to Hall. “If you happen to be in the middle of it — it’s pretty bad. But on a statewide average it’s not nearly as severe as five years ago.” Hall keeps an eye on stream flows as another measure of the water situation in the state.

He says stream flows have been right at normal for the year, so they are okay right now. Hall says the northwest part of the state has gotten some rains that have helped them improve stream flows that had started to become a concern a month or two ago. He says it would be nice to have some rain to boost those stream flows a little more, but the average rainfall totals drop off in each month now into fall and winter.