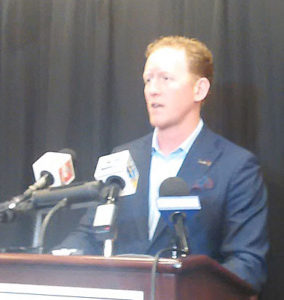 Robert O’Neill told the crowd gathered at the 32nd Annual Siouxland Chamber of Commerce Banquet that he took part in roughly 400 combat missions, but the one most people are interested in hearing about is the May 2011 shooting of the founder of al-Qaeda.

“That one sunk in right away, not because we got (Bin-Laden), but because we lived,” O’Neill said. “It’s never not interesting to go through that one.” Bin-Laden was said to be the mastermind behind the September 11, 2001 terrorist attacks on the U.S. that killed nearly 3,000 people.

The 41-year-old O’Neill recalled meeting family members of 9/11 victims. “Everyone was crying, people with heads in their hands, and they told me ‘there will be no closure for 9/11, but this helps with the healing – a real face and a real name, someone who was there and saw (Bin-Laden dead), there’s no conspiracy about it.’ That’s when I started to realize if I can help this many people in this room, I could help thousands,” O’Neill said.

In his book, “The Operator,” O’Neill wrote about the Bin-Laden mission and others he was involved in – including the 2005 rescue of Navy Seal Marcus Luttrell. O’Neill told the group in Sioux City the lessons learned in his combat training can be applied to business and everyday life.

“Even if I had a decision already made when I was a team leader, I would always ask for input from others anyway, to make sure they knew they were apart it,” O’Neill said. “I talk a lot about stress management and how stress is in your mind, it’s a choice and you can drop it anytime you want. You can only get as stressed as you allow yourself.”

O’Neill joined the U.S. Navy at the age of 19, one year after graduating from high school in Butte, Montana. He left the Navy in 2012 and now works as a public speaker.