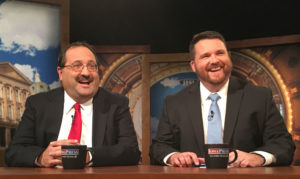 “If you have a shortfall, we can’t cut services in the middle of a fiscal year like that. That would be completely irresponsible. We’d be going back to the Culver years if that’s what we did,” Kaufmann said.

“I was in the governor’s office during that time and (Republicans) railed at the fact that we had to….occasionally do the exact same thing that Kim Reynolds is doing,” Price said.

Kaufmann said the shortfall was an unavoidable. Price said former Governor Branstad and Reynolds have drained “about half” of the billion dollars in the state’s cash reserve and “rainy day” fund.

“This is a manufactured crisis,” Price said. “…This is coming about because the state is giving out way too many tax credits to corporations.”

Kaufmann said the $13 million Reynolds removed from the economic emergency fund will be paid back.

“You can prepare a budget, but there’s always going to be factors that come into play,” Kaufmann said. “The commodity prices, sales tax revenues — that had to be reacted to. I think this was the most appropriate way for the governor to do that.”

Kaufmann and Price made their comments during taping of the “Iowa Press” program that airs Friday night on Iowa Public Television. The two chairmen discussed a variety of other issues, including health care policy. Kaufmann, the Republican leader, suggested a GOP-sponsored bill pending in the U.S. Senate that would repeal ObamaCare would be a “starting point” for negotiations on replacing ObamaCare.

“If there is a message from the Donald Trump victory and if there’s a message that’s been sent to us by Iowa voters and, I think by the entire country, that is: ‘You’d better remember what you promised in the campaign,'” Kaufmann said. “Repealing and replacing ObamaCare was one of the prime promises that were made.”

Price, the Democratic leader, said the latest GOP proposal would be a “disaster” for consumers.

“Democrats agree on one thing and that is that everyone should have health care. Health care is a right, not a privilege,” Price said. “…We may disagree exactly what the process, what vehicle it is that’s going to get us to our goal, but we all agree on the same goal.”