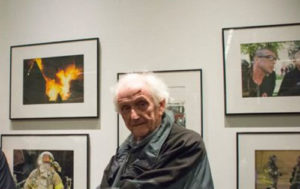 The Sioux City Public Museum is hosting a unique photo exhibit as part of recognizing October as Fire Prevention Month.

The exhibit called “Fully Involved” features 51 pictures taken by local photographer George Lindblade of Sioux City Fire Rescue personnel in action. The photos are from Lindblade’s 2015 book of the same name, which has around 500 pictures of local fires.

He says he has been going to fires since 1947 and remembers it was a Congregational church that burned up. Lindblade was named the official Photographer of Sioux City Fire Rescue in 2014.He estimates he has been to more than 1,000 fires.

“Every one of them has a story and one thing I would hope that people who cover fires and go to fires notice — I don’t make an emphasis of shooting the fires themselves,” according to Linblade. ” I look at the people who are putting the fire out, because that’s where the story is. The story is in their face and you can tell by their dedication and what it means to them.”

The photo exhibit will be on display at the museum until November 5th when the pictures will be donated to Sioux City Fire Rescue.