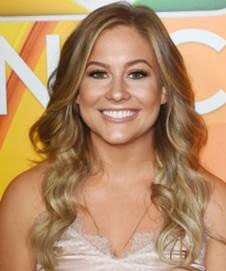 At just 25, Johnson has won Olympic gold as a gymnast, the mirrorball trophy on “Dancing with the Stars,” and her first book was a New York Times best seller. Her latest project is called “Adventure Capitalists.”

“What the show entails is kind of like ‘Shark Tank’ meets the outdoors or ‘Survivor’ almost,” Johnson says. “It’s funny because it’s the same concept as ‘Shark Tank’ but when the person pitches us their product, we actually go test it outside, do crazy things with it and then offer and negotiate a deal.”

The products are typically some sort of rugged outdoor gear, ranging from mountain bikes to kayaks. “I thought it was a perfect combination of business and fun and adventure and risk,” Johnson says. “I’m an adrenaline junkie so it was drawing me in with all of that and I thought it’s the perfect fit for me.”

While some may question the business credentials of a person her age, remember, Johnson starred on “Celebrity Apprentice” in 2015 when it was hosted by the man who’s now the president of the United States.

“I started my career when I was 12 years old and I’ve kind of grown up in the business world, negotiating contracts and deals,” Johnson says. “It’s a little bit different from venture capital but I’ve learned a lot. My husband has worked in venture capital before as well, so it’s something I’ve understood and been a part of for a while.”

Johnson first rose to global fame in the 2008 Summer Olympics in Beijing, China. Hundreds of millions of viewers worldwide watched as the then-16-year-old from West Des Moines won four medals, including gold, on the balance beam. Earlier this year, she was inducted into the Gymnasts Hall of Fame for her years of achievements.

Gymnastics will always be a part of my life,” Johnson says. “Whether it’s coaching during the summer, I do a lot of camps and clinics and work on the technical side. I go to the huge competitions and I’ve been watching world championships lately live on YouTube and it’s part of who I am. I’ll always be involved.”

Johnson says much of her time is spent working in social and digital media, and running a YouTube channel with her pro football player husband. She and Andrew East maintain homes in Los Angeles and Nashville.