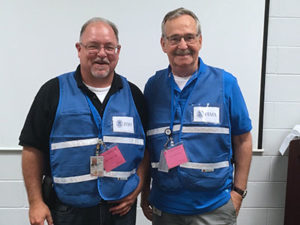 Governor Kim Reynolds says FEMA has been “stretched thin” due to the hurricanes and wildfires that have struck “more than a dozen states,” so three officials from the Iowa Department of Homeland Security and Emergency Management are being deployed to assist in FEMA operations.

Pat Hall and Dennis Harper have each worked for the state’s disaster-response agency for more than 20 years. They left Friday for Puerto Rico and are expected to be there at least a month. Tomorrow, Joyce Flinn, who’s a senior operations administrator for Iowa Emergency Management, will leave for two weeks of work at FEMA’s National Response Coordination Center in Washington, D.C.. She worked there for two weeks in September as well.