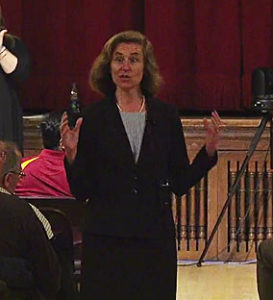 The second finalist for the president’s job at Iowa State University visited campus Tuesday afternoon for an open forum.

Pamela Whitten says ISU is already a very good school, but can become and exceptional one. She says one key is to improve the retention rate of students and also the graduation rate.

She says the 76 percent rate for students graduating in six years is good, but that needs to move up to 80 percent. And she says the 44 percent four-year rate needs to reach into 60 percent or better. Whitten is currently the senior vice president for academic affairs and provost at the University of Georgia.

She took questions from the audience as part of her forum and was asked about her views on diversity. Whitten replied that Iowa State has a long history of promoting diversity.

“Every impression that I have is that commitment continues at this university — at least all that I have been told,” Whitten says. “But the commitment of course and the climate and the culture that you create has to be accompanied by direct and discreet actions to be sure that everyone understands that you are living in a place and working a place that sincerely values different perspectives.” Whitten says the university needs to constantly be working on the issue.

“Certainly one thing you need to do is be proactive. So rather than waiting for an incident to happen — which unfortunately happens on college campuses today — you need to be having the dialogue continuously,” according to Whitten. Whitten was also asked about the recent cuts in state funding and how she would go about getting more state funding for the school.

“Certainly an important part of playing the leadership role at any university the days is the work that you do with your general assembly, with your legislators,” Whitten says,” and that’s just a key part of the job. So there are relationships to be maintained, and frankly there is an opportunity form a fresh face and voice presenting the arguments as well.” Whitten says another key is getting out the message about the return on investment the state receives from the money they put into universities. She says universities have understood internally how important they are, but have gotten away from selling that message outside of campus.

“So frankly there’s some work to do that’s not going to happen overnight in reestablishing that value and that appreciation for the return on investment and the impact on those who go through school as well as society as well.” Whitten says. The third finalist, Dale Whittaker, who is the provost and executive vice president at the University of Central Florida, Orlando, will visit campus today and hold a forum this afternoon.