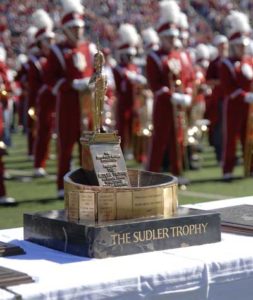 The Iowa State football team, which just moved into the top 25 rankings for the first time since 2005, will be sharing the spotlight with the ISU marching band this Saturday. The John Philip Sousa Foundation will formally present the Iowa State University Cyclone Football “Varsity” Marching Band with the Sudler Trophy during halftime of the homecoming football game.

The band’s director, Christian Carichner, says the award is equivalent to the Heisman Trophy – given annually to the nation’s top college football player. “We were awarded this trophy. It was a highly selective process and a lot of college bands in the country applied for this,” Carichner said.

The ISU band was secretly nominated for the award by someone outside the school. The band learned it would be receiving the 80-pound trophy, designed by the same artist who made the Heisman Trophy, last December.

The nearly 400-member ISU band is preparing for a special performance this weekend. “We’ve got a 300-person alumni band coming back. They’ll be performing on the field with us, so we’ll about 700 band people on the field,” Carichner said. “And there are, I think now, 12 former directors or assistant directors of the Cyclone marching band coming back – directors of bands dating back into the 1960s.” 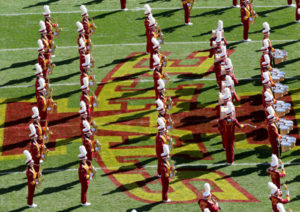 The Sudler Trophy is an international award recognizing programs for “demonstrating the highest musical standards and innovative marching routines.” The award is presented to one band every two years, so the trophy will remain on the Ames campus until 2019.

Elena Foster, a senior from Iowa City, is a drum major for the ISU marching band. “This award just means so much to the band of saying ‘you are one of the best bands in the nation and we want to reward you for that, and we want you to share this title with so many amazing bands that came before you as well,'” Foster said.

The ISU marching band is just the 32nd program to receive the honor. The University of Iowa marching band was awarded the Sudler Trophy in 1990.

Governor Kim Reynolds will also recognize the Cyclone Marching Band by signing a proclamation Thursday morning in her office at the Iowa State Capitol.