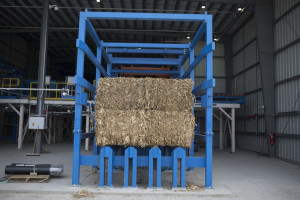 A bale of corn stover that’s turned into ethanol.

The cellulosic ethanol plant in Nevada is being closed, putting dozens out of work. DowDuPont owns the facility in Nevada and is hoping to find a buyer.

Shutting down the plant is part of the newly-merged company’s move to cut costs by $3 billion. That includes reducing up to seven percent of DowDuPont employees. Ninety people are on the payroll at the plant. DowDuPont issued a statement saying: “affected employees will receive support services during this transition.” It’s likely a few will be kept on to maintain the plant until a buyer is found.

The facility is just a few miles east of the Highway 30 exit off Interstate 35 and sits alongside Lincolnway Energy, a traditional ethanol plant. Politicians often makes stops at the facilities.

Dow and DuPont have recently merged and the company issued a written statement on the closure: “While we still believe in the future of cellulosic biofuels we have concluded it is in our long-term interest to find a strategic buyer for our technology including the Nevada, IA biorefinery.”

DowDuPont will continue to produce enzymes and yeast that are components used in the process of making ethanol.

“They are taking two companies and combining them into one and then splitting them into three and the third that this was going to end up in end doesn’t want to pursue this technology,” Shaw said. “They’ve got other irons in the fire. That’s fine.”

“While we’re sad to see that this new entity with new leadership has some other priorities, I think that the outlook for the whole industry is pretty good,” Shaw said.

“Right now we’re really on the cusp,” Shaw says. “I think in that year we’ll have more cellulosic ethanol production in that year than we probably have in all the previous years combined.”

A dozen Iowa plants are seeking EPA approval to produce cellulosic ethanol with corn kernel fibers and Shaw estimated that would yield another 30 million gallons of ethanol.