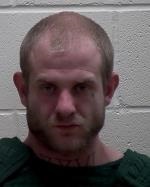 A Mason City man faces two counts of first-degree murder after two people were found dead in their home on Tuesday morning.

Mason City police say they were called to 327 27th Southwest on a welfare check at about 7:45 yesterday morning.

Police entered the home and found the two bodies. Police identified 25-year-old Codie Matz as a material witness in the case, with Matz being arrested Tuesday afternoon in the Polk County community of Bondurant.

Matz was transported back to Mason City, being booked into the Cerro Gordo County Jail shortly after 6:30 Tuesday night.

Online jail records show that Matz is being held without bond on the two first-degree murder charges. The records did not indicate a date that he’s due in court.

If convicted of first-degree murder, Matz would face life in prison without the opportunity for parole.