You are here: Home / Human Interest / Iowa veterans to be honored on new Freedom Rocks in three cities 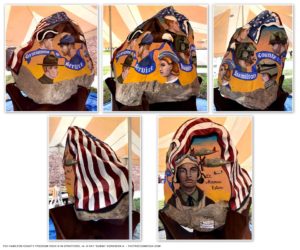 The Freedom Rock in Stratford

Three new Freedom Rocks, painted by Ray “Bubba” Sorensen of Greenfield, will be dedicated in three Iowa communities this Saturday — on Veterans Day.

Sorensen says one of them is in the Hamilton County town of Stratford and it will feature a series of soldiers’ faces, men and women, which all look like they could be related.

The rock in Hamilton County also pays tribute to a Tuskegee airman who was killed in action in World War Two.

“Not only are the Tuskegee airmen rare, but they have incredible stories and incredible acts of heroism fighting not only the enemy but racism at that time,” Sorensen says. “It’s just a neat story as well.”

The dedication ceremony will be held this Saturday afternoon at 3 PM in Stratford. Other ceremonies will be held in Cresco in Howard County and Murray in Clarke County.

There are now 68 Freedom Rocks across the state with the goal of having the rocks located in all 99 Iowa counties by 2020.