You are here: Home / News / RNC chairwoman Romney McDaniel says 2018 a ‘most critical time’ for Republicans 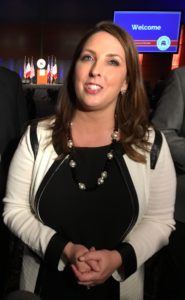 Iowa Republicans gathered in Des Moines tonight for a party fundraiser and the GOP’s top leaders urged the crowd of activists and office-holders to avoid complacency.

“This is the most critical time for our party, just as critical as this last election,” Republican National Committee chairwoman Ronna Romney McDaniel said at the close of the evening. “If we lose these midterms, if we give up our majorities in the senate and the house, we know that our government will stall out, the president will not be able to accomplish his agenda and we will go into 2020 a weakened party.”

Sean Spicer, the man who served about eight months as White House press secretary, also took the stage, with a microphone in his hand.

“If you don’t mind, I’m going to stay away from the podium,” Spicer joked. “I told my wife I was giving them up for good.”

Spicer, as you may recall, was parodied on Saturday Night Live by actress Melissa McCarthy who crashed a mobile lectern into a group of reporters. Spicer encouraged the crowd of about 550 Iowa Republicans to avoid “fighting with each other” and imposing “litmus tests” on GOP candidates in 2018.

“There is a stark difference between the worst Republican and the best Democrat,” Spicer said.

During a later portion of the evening that featured Spicer, Romney McDaniel and Iowa GOP chairman Jeff Kaufmann having a conversation on stage, Spicer said he’s “really worried” about the 2018 midterms.

“I see the sacrifice that so many people are making,” Spicer said, “and then sometimes the silliest skirmishes get in the way of progress and success because there was this: ‘Someone didn’t get the credit they deserved.’ Or they think someone’s establishment or they’re not pure enough on something.”

AUDIO of Spicer, Romney McDaniel and Kaufmann on stage for 23 minute conversation.

Tonight’s event started about 24 hours after the polls closed on statewide elections in Virginia and New Jersey that saw Democrats score victories. Kaufmann told reporters the lesson for the GOP is to “be aggressive” in 2018.

“Don’t be complacent,” Kaufmann said. “If Republicans show up, Republicans are going to win.”

During a question-and-answer session with reporters soon after she landed in Iowa, Romney McDaniel rejected the idea Tuesday night’s election results were a surprise.

“Virginia’s a state that’s been trending blue. New Jersey had its own unique circumstances. It wasn’t a surprise that it went blue for their governorship. It means we’re at the status quo and I think it means we’re going to go into a very competitive 2018,” she said. “The RNC’s very well positioned. We’ve raised record funds and we’re putting staff on the ground all across the country and we’re going to have staff here in Iowa.”

President Trump criticized the Republican who lost the Virginia governor’s race for failing to fully “embrace” Trump’s political brand. McDaniel told reporters Trump “is in line” with his core supporters and his policies will “resonate” in 2018.

“There is no problem running as the party of Donald Trump,” Romney McDaniel said during the news conference. “Look at record fundraising for the RNC. We’ve passed the $100 million mark for the first time in a post-presidential year, mainly on the support of small dollar donors that are giving under $200. That’s the enthusiasm for the president.”

The chairwoman of the Republican National Committee also told reporters she expects Iowa’s Caucuses will be the lead-off event in the 2020 presidential race.

“We have a site-selection committee and I don’t see anything changing,” Romney McDaniel said.

Mitt Romney, the GOP’s 2012 presidential nominee, is McDaniel’s uncle and McDaniel said she has “fond memories” of campaigning for him here.

“One of the things that I think is special about Iowa and the First-in-the-Nation status is I saw firsthand how seriously the voters took it here when I came in for the (Iowa GOP) Straw Poll,” Romney McDaniel said. “They love seeing the candidates. They get out. It’s a state that you can travel to all the 99 counties. You can afford the media markets, so I think it’s a state that takes that roll very seriously and I don’t see any changes.”

Kaufmann, the Iowa GOP’s chairman who was standing beside McDaniel, joked that he was “tearing up” as he listened fo Romney McDaniel’s comments about the Iowa process.