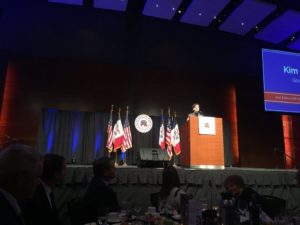 “Iowa has a partner in the White House whether we’re talking about the importance of a robust Renewable Fuel (Standard), Waters of the US, health care, workforce,” Reynolds said. “We have had, I have had unbelievable — not just me, all of us — access to the president, the vice president and the cabinet.”

Reynolds did not lay out a specific agenda for the 2018 Iowa legislature, but she did speak about some of the unfinished business in congress.

“The fundamental truth in any democracy is elections matter whether it’s at the courthouse, the statehouse or Washington, D.C. and because of your hard work in this last election, we do have the trifecta in Washington. We have Justice Gorsuch and we are putting in place conservative judges at the district and circuit court,” Reynolds said. “We have less regulation and I am optimistic about tax reform and repealing and replacing ObamaCare.”

House Speaker Linda Upmeyer of Clear Lake is the top Republican in the state legislature. Upmeyer told the banquet crowd Republican legislators were “super energized” by the 2016 election results and “got busy” passing conservative priorities.

“We took on the powerful unions and reformed collective bargaining to get the real decision-making and the flexibility back to local governments and local school boards,” Upmeyer said. “We protected life by banning late-term abortion and defunding abortion providers like Planned Parenthood. We passed a common sense voter ID bill that ensures integrity in our election system, just like 30 other states have done.”

“This is important,” Upmeyer said. “We need to keep the momentum going in 2018. We have to do that.”

“The stars finally lined up, ladies and gentlemen,” Dix said.

Dix said he never had “more fun” as a lawmaker than he did during the past legislative session, but Dix added that the GOP is ready to fulfill more of its campaign promises in 2018.

“We are beginning to put together chapter two right now, have been working on it over the course of the summer, working with Governor Reynolds, House Republicans. We are not done,” Dix said. “…Hang on.”

Reynolds delivered a similar message to the crowd of 550 GOP activists.

“We have so much on the line and we want to make sure as the speaker said and Majority Leader Dix said, we want to build on that progress and not reverse it,” Reynolds said.

Cedar Rapids Mayor Ron Corbett, the Republican who’s challenging Reynolds bid for election to a full term as governor, attended the GOP fundraiser last night, but he was not invited to speak.