You are here: Home / News / Reynolds removes Saudi agents who volunteered for her campaign 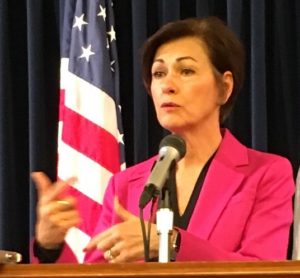 Governor Kim Reynolds has cut political ties with a prominent Iowa Republican couple while a state ethics board looks into their work as foreign agents for Saudi Arabia.

Executive branch officials Kim Schmett and his wife, Connie, lobbied against passage of a federal law that lets victims of the 9-11 attacks sue Saudi Arabia. Reynolds says the Schmetts are no longer co-chairs of her Polk County campaign because of their lobbying.

“I didn’t agree with what had happened,” Reynolds says. “It wasn’t acceptable.”

Saudi Arabia paid the couple more than $100,000 to recruit veterans to fly to Washington, D.C. and speak against the bill. Reynolds has donated $100 to a fund helping victims of the September 11th attacks — as $100 is how much the Schmetts had donated to her campaign.

“We have campaign finance looking into it, so they are reviewing to see if they have done anything wrong,” Reynolds says.

Last week Reynolds called on the legislature to close a loophole in state law that appears to let state officials work as agents of a foreign government. Kim Schmett is paid an $80,000 a year salary as chairman of the Iowa Employment Appeal Board. His wife serves on the Health Facilities Council — a state board the decides whether new hospitals and clinics may be built. Reynolds told reporters last week she has no authority to fire them, as they were nominated for those posts by former Governor Terry Branstad and confirmed by votes in the state senate.