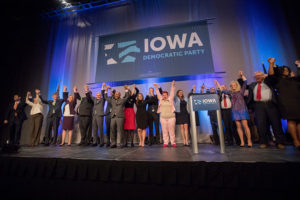 Some unity pitches and a couple of sharp elbows were thrown this week when the seven candidates seeking the Iowa Democratic Party’s nomination for governor spoke at a party fundraiser.

All the candidates were invited on stage Monday night at the Iowa Democratic Party’s Fall Gala, for something akin to a class picture.

Then each spoke separately for about five minutes. State Senator Nate Boulton of Des Moines warned his fellow Democrats that it will take more than shouting and protests about Republicans.

“While we have been proud to stand up against their agenda, to win in 2018, we must talk about our plan to fight back,” Boulton said.

“In this room, we need to stand together united and leading with our hearts to put people in this state first again,” Hubbell said.

The legal settlement awarded to a woman who used to work for Senate Republicans was directly mentioned by three of the Democratic candidates. Dr. Andy McGuire of Des Moines, a former Iowa Democratic Party chair, said she is “disgusted” in the “unacceptable culture of harassment, discrimination and retribution” in the Iowa Senate.

“How many of you have felt the sting of harassment in your life? I, too, have felt the pain of not being valued,” McGuire said. “As governor, I will change a culture that says it’s o.k. to harass and abuse another and get away with it.”

John Norris of Des Moines, who also served as Iowa Democratic Party chairman at one time, made his point on the issue by mentioning his family.

“I am confident my sons will lead a generation that respects women,” Norris said.

Boulton told the crowd it was important to do more than just make sure Iowa workplaces are safe for women.

“But to make sure that Iowa women get equal pay for equal work,” Boulton said.

Boulton and Hubbell had the largest cheering sections at the event, many of whom were sitting in the bleachers where tickets were 50 dollars each. While Hubbell spoke, some Democrats supporting other candidates held up the spoons from their placesetting in the banquet area, calling attention to his background as the son of an icon in the state’s insurance industry. Norris ended his speech with this rap on some of his rivals.

“Our campaign’s not about buying expensive…seats at the gala,” Norris said. “It’s about providing a seat at the table of government for every Iowan and especially those who have been shut out,”