You are here: Home / Sports / Drake mourns the death of Paul Morrison 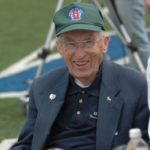 Drake Athletics and Drake University mourn the loss of one of Drake University’s most iconic and cherished individuals, Paul Morrison. Morrison, who earlier this year celebrated his 100th birthday, passed away Thursday in Des Moines.

“Paul represented everything that is great about Drake University,” said Drake University President Marty Martin. “He was a wonderful husband, father, and grandfather. He was a loyal and trusted friend to so many in our community. He was an outstanding servant-leader in Drake athletics for decades, including long after he had officially retired. Paul was a man of good will and good cheer in everything he did. And, he always showed up! We will miss Paul dearly for a very long time.”

Morrison’s legacy at Drake stretches more than a century as his parents, Marion and Leonta, met at Drake in 1902. Paul followed his parents to Drake, enrolling in 1935 and graduating in 1939 with a degree in journalism. Morrison served in the Army in the Pacific during World War II, ascending to the rank of sergeant. Upon his return from the war, he worked briefly for The Gazette in Cedar Rapids before being hired in 1945 as Drake’s first full-time director of the news bureau. He served as sports information director and athletics business manager during his career, from which he retired in 1986.

Morrison attended more than 700 Drake football games, 80 Drake Relays, and counted 16 members of his family as Drake alumni. He was married to his wife, Pauline, in 1949 and enjoyed 42 years of marriage before she passed away in 1991. He was also preceded in death by a daughter, Mary.