You are here: Home / News / Governor says goal is to cut and simplify state income taxes in 2018 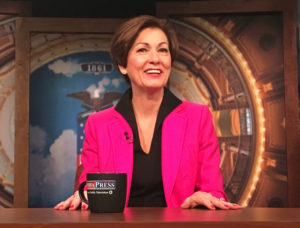 Governor Kim Reynolds today said “almost everything is on the table” as she and her fellow Republicans in the legislature craft a tax package.

“I can’t think of one thing that I would take off, but I don’t want to lock myself in,” Reynolds said. “…If you start peeling things off, it really inhibits your ability to have honest tax reform.”

The goal is to both simplify the process of filing state income taxes and reduce the taxes Iowans pay according to the governor.

The governor isn’t ruling out a so-called “flat tax” on income, but Reynolds indicated it’s too early to say what the end product may be. She does say Iowa policymakers have to wait to see what happens at the federal level before deciding whether a popular deduction is eliminated. That deduction lets Iowans subtract their federal tax bill from their income before calculating how much they owe in state income taxes.

“While we’re still working on the details, there’s a lot of significant factors that are still unresolved,” Reynolds said.

The governor isn’t revealing what tax changes may have been ruled out, but Reynolds is suggesting the volume of state tax credits available may shrink.

“Almost everything is on the table and so we’re taking a look at that. We’re doing the due diligence. Sometimes there are ways that you can adjust the existing ones, but I think that has to be part of the conversation,” Reynolds said. “The reason they’re using the credits right now is because we’re not competitive with our tax rates, so if we can become more competitive, that really reduces the need for some of the tax credits.”

The State of Iowa awarded $427 million in tax credits last year, ranging from the lucrative research and development tax credit for businesses to a $100-per-year tax credit for fire fighters.

Reynolds made her comments this morning during taping of the “Iowa Press” program that airs tonight at 7:30.