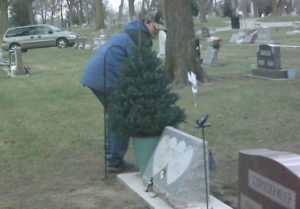 A Charles City man is jailed after he was caught on camera stealing Christmas lights from a small tree at a gravesite.

Charles City Police arrested Terry Brandt, charging him with 5th degree theft and one count of possession of stolen items. Brandt was caught on a hidden camera at Riverside Cemetery. Police initially asked for the public’s help in identifying the man on social media, which lead to Brandt’s arrest.

Through the investigation, stolen property was recovered at numerous homes in Charles City. Police say other charges are pending.