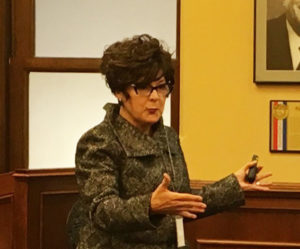 The administrator of the state’s economic development agency there’s a big need for more housing in Iowa and she’s proposing a change in the way state tax incentives are awarded to “workforce housing” projects.

“I just don’t think that’s how you run a program and we want to go to the legislature where they would let us make it competitive and we’d do a scoring process,” says Iowa Economic Development Authority director Debi Durham.

Each year, the state awards $20 million worth of tax incentives to developers building housing aimed for working-age Iowans. Durham says the waiting list for these tax credits stretches to 2021. In the future, Durham says the projects should be prioritized and awarded in areas with the most critical housing shortages.

“And then we can be a little bit discerning about how we can distribute it around the state and so that’s one of the changes we want to make,” Durham says. “…If we’re not going to get more capacity in the program, then we need to make sure we’re putting the dollars where they really need to be.”

Iowa’s housing shortage is magnified in smaller cities, where few new houses are being built. Durham’s agency has set aside $5 million in its $20 million yearly tax incentive package for housing projects in “small cities.”

“Places like Tama or Wright County where you’re seeing Prestage go, I mean they’re really, really needing houses up in those areas,” Durham says. “…That $5 million, I think it’s too low. If we had the capacity, I think we need to do a stronger carve-out.”

But given state spending constraints, Durham has presented a “status quo” budget plan to the governor for the coming year.

Many business owners cite the shortage of single-family homes and apartments in Iowa as an impediment to hiring new employees.