You are here: Home / Agriculture / Average cost for an acre of farmland goes up in ISU survey 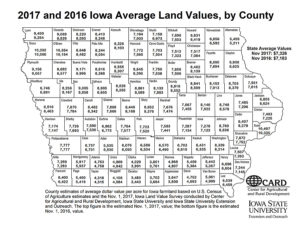 The new survey by the Iowa State University Extension department shows a slight increase in the average farmland value after three straight years of declines.

“I would not rush into the conclusion that the market has fundamentally improved. Likely we are still in a trajectory of the stabilization in the next one or two years,” he says.

The average statewide value of an acre of farmland is estimated at $7,326, or $143 more for an acre compared to last year.
Commodity prices remain low and Zhang says a full recovery of the ag economy will take some time. “The farm income likely will still stabilize, the interest rate likely will rise again. So I would interpret as the stabilization or temporary break for us to assess where we are,”Zhang says.

Scott and Decatur counties reported the highest and lowest farmland values for the fifth straight year. Decatur County reported land valued $3,480 an acre — while Scott County reported a value of $10,497 for an acre.

Just four of Iowa’s 99 counties –Fremont, Mills, Montgomery, and Page –reported a drop in land values this year. Each of those counties reported a decline in value of three-tenths of a percent.