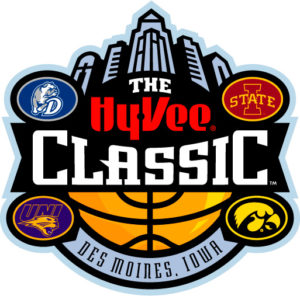 Lindell Wigginton was the spark that lit the fire for Iowa State Saturday at Wells Fargo Arena as the freshman’s big second half pushed the Cyclones to a 76-65 win over in-state rival UNI. The win is Iowa State’s eighth in a row as the Cyclones are now 8-2 on the season. The Panthers fall to 8-3 on the season.

After a quiet first half from the ISU backcourt, Wigginton burst out for a 15-point second half. The freshman finished with 20 points, his fourth 20-point effort in the last five games, to go with seven rebounds and two assists. Five of the eight dressed Cyclones were in double figures as Wigginton was joined by Nick Weiler-Babb (15), Jeff Beverly (10), Donovan Jackson (10) and Cameron Lard

The Iowa Hawkeyes forced 19 Drake turnovers in running out to a 90-64 victory on Saturday.  Iowa improved to 5-1 in games played at The Hy-Vee Classic in Des Moines and evened its season record at 6-6.  The Bulldogs fell to 5-6.

· Junior Nicholas Baer posted his first double-double of the season and fourth of his career today. Baer had 11 points, 14 rebounds, five assists, and five steals. The 13 rebounds and five steals were career bests, while the five assists were a season high.