You are here: Home / News / Snow may be coming in time for Christmas travel 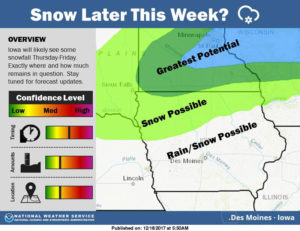 Winter may be making a very timely arrival later this week.

The winter solstice will occur at 10:28 A.M. Central Time on Thursday and forecasters say Iowa may see snow fly about that same time as much colder weather arrives, as if on cue.

Meteorologist Cory Martin, at the National Weather Service, says they’re tracking a storm system that will be moving across the Northern Plains in the Thursday-Friday timeframe.

“It looks likely that parts of Iowa are going to see their first accumulating snowfall of the winter season,” Martin says. “That looks most likely across northern Iowa at this point. Further south, into central and southern Iowa, it’s a little bit more uncertain. We’re going to have some relatively warm air lingering around that might keep us with rain or a rain-snow mix.”

Since it’s still several days away, forecasters are shying away from predicting just how much snow will fall and where, though Martin says it’s likely most of central and southern Iowa will see little-to-no accumulation.

“Further north, how much snow we’re expecting right now, it doesn’t look like anything too heavy,” Martin says. “It looks like the best bet for heavier snow will probably stay up in South Dakota to Minnesota but we’ll continue to monitor that.”

With the Christmas holiday coming up, there will be plenty of motorists on the roads later this week. Martin says the state’s main east-west corridor may be wet but it shouldn’t be white.

“Oh, for Interstate 80, I wouldn’t alter any travel plans at this point,” Martin says. “Just stay vigilant for forecast updates to see if anything changes through the week. One thing to keep in mind for the weekend, we are looking at a rather cold air mass surging south out of Canada. It’s going to be below- to well-below-normal temperatures here. If you’re traveling, make sure you have safety kits with you, just in case something were to happen.”

Another travel hazard on Thursday and Friday could be strong, gusty winds.