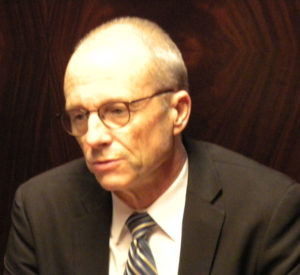 The attorney for a Knoxville man who was charged with murder days after a civil trial found him liable in his mother’s death, says his client was treated unfairly.

“In this case, there was no doubt that law enforcement was working hand-in-glove with the plaintiffs in this case,” Wandro says. The DCI held a news conference Monday morning and said they learned new information in the civil trial that led them to file murder charges against Carter in the death of his mother Shirley Carter in June of 2015. Wandro says the things investigators did in the courtroom probably influenced the jury and the verdict.

“Any of you who were spending time in the courtroom for any extended period of time, you would see the law enforcement people passing notes to the plaintiff’s side,” Wandro says.

Jason Carter’s father Bill filed the lawsuit against him that resulted in a $10 million  civil verdict against Jason. Wandro maintained that it was Bill Carter who committed the murder, not Jason. He says it was unprecedented to have the civil trial before the criminal trial.

“There were lots of things that you folks didn’t see, what was going on behind the scenes in that case. There was evidence that we could not produce that would have revealed to you and the jurors the true nature of Bill Carter,” Wandro says. He says that evidence will come out in the criminal trial.

Wandro made his comments to reporters in a news conference and was asked if he was alleging misconduct by investigators. “I’m not going to say it in those terms. I’m just going to say it was unprecedented, it’s unfair, it’s not the way it should be, and the Supreme Court in the State of Iowa will have the last word on it,” according to Wandro.

He says his concerns are with the way state investigators acted — not with the Marion County Sheriff. “The bone that I have to pick is with the Department of Criminal Investigation,” Wandro said. “The sheriff’s office was always secondary in this stuff, they were taking their orders from the DCI. I think that (Sheriff) Jason Sandholt runs a clean shop and he is a man of integrity.”

Wandro says they will appeal the verdict in the civil trial, and he believes the Iowa Supreme Court will eventually decide his client was treated unfairly. He also says they will seek to have the murder trial moved out of Marion County because they will be unable to find a jury in the county that hasn’t been influenced by the civil trial.

Mitch Mortvedt of the DCI told Radio Iowa the “charge is based on our investigative findings and that a judge deemed there was probable cause to warrant the charge. We will not have any further comment beyond that as the trial is obviously pending.”