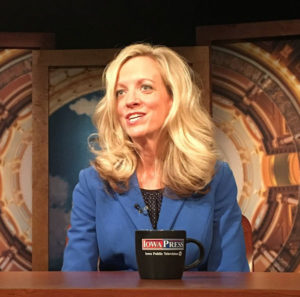 The top Democrat in the Iowa Senate is predicting Republicans will pass “painful” policies during the 2018 legislative session.

Janet Petersen of Des Moines, the Minority Leader in the Iowa Senate, is urging grassroots activists in her party to “adopt” Democrats who are trying to beat Republican senators next November.

“I promise you my New Year’s Resolution is bluer skies will be ahead for this state and a much bluer Iowa Senate,” Petersen said last night during Progress Iowa’s Holiday Party.

Mark Smith of Marshalltown, the Minority Leader in the Iowa House, has vowed to recruit a Democratic candidate in each of the 100 Iowa House districts for the 2018 General Election.

“If you’re thinking about running for public office, see me,” Smith said, to laughter and applause.

Smith and Petersen made their comments at a Progress Iowa fundraiser that attracted about a dozen first-time candidates and 200 grassroots activists.

AUDIO of speeches from Smith and Petersen, 18:00