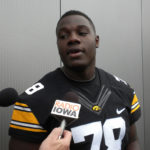 Daniels and Jackson will declare for the NFL Draft, while Wiegers will play a final season as a graduate transfer at Eastern Michigan.

“Josh is another one of our great stories, to earn All-America honors and be voted team captain as a junior,” said Ferentz. “Josh had an outstanding year on the field, and has been a tremendous teammate. He has always had a great work ethic. He is a hard worker who had a positive attitude throughout his career.

“James was very skilled and mature when he joined our program out of high school. It is unusual for a true freshman to step in immediately, but he is a positive guy who had the ability to do so. He has been a good student and teammate throughout his career.”

A native of Corinth, Texas, Jackson was named first-team All-America by as many as 11 media outlets, and was one of three finalists for the Jim Thorpe Award. He was named the Tatum-Woodson Defensive Back of the Year in the Big Ten Conference and was the recipient of the Jack Tatum Award, presented by the Touchdown Club of Columbus.

Daniels earned honorable mention All-Big Ten recognition this season from league coaches and media, and was a third-team selection as a sophomore. He was named to Rimington Award and Outland Trophy preseason watch lists and earned Academic All-Big Ten honors this season.

“James and Josh will do well in their testing and preparations for the NFL Draft,” said Ferentz. “They will be high draft selections and have successful careers in the NFL. We wish both players our best and thank them for their contributions to our program.”

In four seasons with the Iowa program, Wiegers played in eight games. Overall, he was 4-for-6 passing for 35 yards and one touchdown. He received his degree in December and earned Academic All-Big Ten honors. He is a native of Lake Orion, Michigan.

“Tyler competed very hard, and very well with C.J. (Beathard) and Nate (Stanley) throughout his career, I’m not sure we have had anyone work harder,” said Ferentz. “Tyler is an outstanding person. I expect he will be a team leader at Eastern Michigan and a key contributor there next season. We wish him the best.”

Iowa finished the 2017 season with an 8-5 overall record following a 27-20 win over Boston College in the New Era Pinstripe Bowl. The Hawkeyes have posted a 28-12 mark over the past three seasons.