You are here: Home / Business / Vehicle sales drop slightly in 2017, with trucks and SUV’s leading purchases 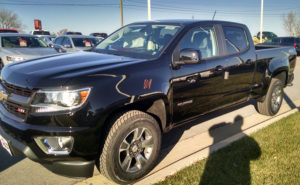 Bruce Anderson, the president of the Iowa Automobile Dealers Association says the drop was small, only  299 cars, and “it was almost an identical year to 2016.” Iowans purchased 137,702 new vehicles last year.

The most popular vehicle in Iowa remains the Chevy Silverado.”And it’s neck-and-neck with the Ford F-150,” Anderson said. “Iowans just love their trucks.” Of the new vehicles sold in Iowa last year, 34,345 were cars and 103,357 were trucks and SUVs.

“That’s a national trend that Iowa is following or maybe even leading – the conversion from driving passenger cars to driving trucks and SUVs,” Anderson said. While overall sales dipped a bit compared to 2016, the Iowans who did buy new vehicles last year tended to purchase more expensive vehicles.

“I think that’s true,” Anderson said. “Prices are competitive and dealers have great deals right now, but credit has eased a bit and you’re seeing banks and funding sources are lending…that has loosened up somewhat, so people are getting qualified and more into the cars they want and need, rather than just the ones they can afford.” For example, luxury brands like Audi and Jaguar enjoyed a sales boom in Iowa last year.

“Jaguar nearly doubled their new sale footprint. There were 84 new Jags sold in Iowa in 2016 and 163 in ’17,” Anderson said. Audi also nearly doubled its sales in Iowa. According to the records kept by Anderson’s group, Iowans bought 44 different brands of vehicles in 2017.