You are here: Home / News / Blizzard warning issued for 16 counties 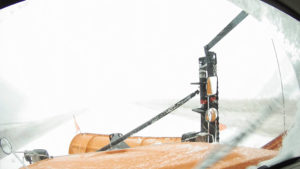 Road conditions are deteriorating in northwest Iowa as a Blizzard Warning is posted for 19 counties across the region, with another 16 Iowa counties under winter storm warnings and advisories.

Forecasters say the region may get between six inches and a foot of snow by tonight, though some areas may see up to 16 inches. Trooper John Farley, with the Iowa State Patrol, is watching over parts of Interstate 29 and says if you don’t have to go out, don’t.

“We’re receiving heavy snowfall, snow and sleet, and it is 100% covered on the interstate consistently between Sioux City and I’m just north of Onawa right now,” Farley says. “We are definitely in that ‘travel not advised’ arena.” There have been some fender benders and cars sliding into ditches along that stretch of road, he says, but not many. 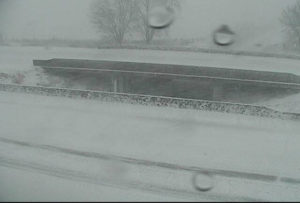 DOT camera on Southbound I-29 in western Iowa.

“People have taken the heedings, the warnings that were issued even last night about travel,” Farley says. “There has not been a lot of traffic on the interstate, not that they’re completely empty, but the traffic that is moving is light but it’s very slow. Top speeds are around 35 to 40 miles an hour, tops.” Snow plows and spreader trucks are out in force, scraping the roadways and sprinkling salt, sand and brine solution.

“Oh, yes, our partners with DOT roads, you bet,” Farley says. “They are out and they’re doing a great job. They’re keeping up with it. With the amount of snow that’s coming down, I think it’ll be hard to stay ahead of it, but they are definitely keeping up with it.” Many schools and businesses in the region are closed. The snow likely won’t last too long as forecasters say high temperatures in the state may be climbing as high as the mid-50s later this week. Today’s normal high for Des Moines is 31 degrees.