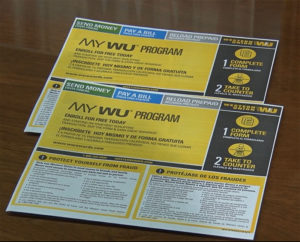 Iowa Attorney General Tom Miller says a deadline is approaching for anyone who may’ve been a victim of fraud involving a Western Union money transfer.

“Two federal agencies found massive fraud being implemented through Western Union,” Miller says. He says the company “sort of looked the other way” as the fraud happened. The Federal Trade Commission and U.S. Department of Justice reached a $586 million settlement where the company will pay back those who were victims of fraud.

“The federal government has contracted with a and outside agency — a third party– to implement the settlement, ” Miller says. “They have or are in the process of sending letters to various people who have complained about these types of problems kinds of problems.” You have until February 12th to make a claim. Miller says his office got information from Western Union on money transfers by Iowans of 500 dollars or more to what are called “suspect countries,” and mailed letters to them. Miller says some 18-thousand Iowans were on the list.

“The majority of the transfers were legitimate for one reason or another. But there’s a significant number that weren’t legitimate and we are working through the process of people making their claims,” Miller says. He says Western Union is asking people for a wire transfer number, but says some people may not have that number.

Miller says they are asking federal officials and the company to change their procedure so if a person gives their name, amount and date of transfer and it matches their records that they get a refund. The refunds cover the time period between January 1st, 2004 and January 19, 2017.