You are here: Home / News / Reynolds to negotiate with GOP lawmakers for ‘responsible’ budget cutting plan 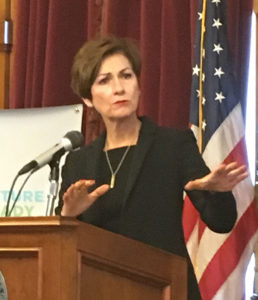 Governor Kim Reynolds today said she and her staff “spent a lot of time” developing her plan for trimming nearly $30 million out of the current year’s budget — and she’s ready to negotiate with her fellow Republicans in the Iowa Senate over a plan that would cut more than $20 million deeper.

“It’s part of the process,” Reynolds told reporters this morning during her weekly news conference. “We’ve been working on this a lot longer than they have. We’ll continue to work through it and we’ll do that with both the House and the Senate and hopefully we’ll get to a responsible place.”

Reynolds is not criticizing any of the specific cuts Republicans in the Senate propose, like more than $24 million in cuts to the state universities and community colleges. The Senate Republicans recommend a cut in the state’s court system that’s three times as much as the governor recommended, prompting court officials to warn court operations in 30 county courthouses would be suspended “indefinitely” if that deep a cut is approved. Reynolds said that “would have an impact” on “access to justice” in Iowa.

“I think there’s ways that we can respect some of the things that are really important to them by really reducing the impact on Iowans and services,” Reynolds said. “And so that’s the conversation that we’ll have moving forward.”

Reynolds said Iowans expect state officials to be “fiscally responsible” and “there is a way” to make budget cuts without major disruptions in state services.

The Senate Republicans’ plan for cutting the current year’s budget cleared a committee last week and is ready for debate in the full senate. House Republicans have not yet unveiled their budget-cutting priorities.