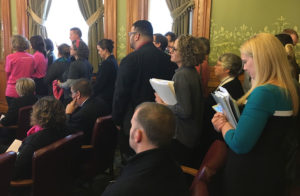 People lined up to speak at the hearing.

A bill that would ban abortions in Iowa after a fetal heartbeat can be detected cleared a senate subcommittee this morning after emotional and pointed testimony at a public hearing.

“‘The Golden Rule’ is to treat others the way we want to be treated. Is there anybody in this room who honest to God wishes that they’d been aborted?” asked Chuck Hurley, vice president of The Family Leader, an evangelical Christian group.

Some in the crowd reacted angrily.

A doctor told lawmakers a fetal heartbeat may be detected as early as four weeks into a pregnancy. The Iowa Medical Society warned lawmakers the state’s only training program for OB/GYN doctors will be shut down if the bill becomes law. Scott Valencia, chairman of the Iowa Coalition of Pro Life Leaders, responded.

“If a heartbeat exists, there is life…if all of them are going to leave because we stop finding better ways to take lives, we have a bigger problems to be looking at here,” Valencia said.

Jamie Burch of Planned Parenthood of the Heartland said the bill “intentionally goes too far.”

“The motivation behind this bill is clear: to create a vehicle to challenge Roe v Wade,” Burch said. “If this bill passes and is signed into law by our governor, it will open the door to endless litigation.”

Iowa Catholic Conference executive director Tom Chapman told lawmakers the church believes life begins at conception, but is “neutral” on the bill because it is “likely unconstitutional.”

“We should consider the unintended, long-term consequences that could result from our court finding a robust right to an abortion in our state constitution,” Chapman said. “which could result in the elimination of some of the limitations we already have in Iowa.”

A senator told Chapman to go back to the state’s four Catholic bishops and rethink their stance on the bill.

Leah Vanden Bosch wore a pink t-shirt to signal her support of Planned Parenthood. Vanden Bosch told legislators she would have killed herself if she hadn’t had an abortion.

“I don’t want to be sharing my story…but I feel like I have to stick up and represent these women,” Vanden Bosch said. “I’m praying to the same God that you are right now this morning and he’s pushing me here to speak to you and show you a different side.”

At the conclusion of the public hearing, half dozen senators spoke about the bill — giving a preview of the debate to come in a senate committee next week.

If the bill becomes law, doctors found guilty of performing an abortion after the sixth week of pregnancy could be charged with a felony and face up to five years in prison.