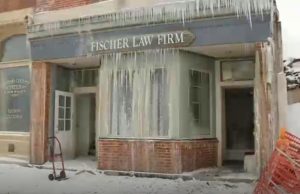 Several old buildings, gutted in a massive fire last week in downtown Vinton, are now being demolished. Robert Fischer is struggling to say goodbye to the building that’s been in his family for generations.

He spoke with KCRG-TV this weekend while working to salvage items from Fischer Law Firm. “A lot of water damage in there, a lot of smoke damage, but amazingly there are a lot of books and papers that were still dry,” Fischer said.

The building, deemed too unsafe to save, has been a law firm for the Fischer family since the 1800’s. “I’m heartbroken, absolutely heartbroken,” Fischer told KCRG. “This has been in my family all my life. I grew up as a kid here. When my dad was an attorney here, I used to come down here and play as a little boy.”

Two other buildings were demolished over the weekend. The fire started last Thursday night in the Michael and Dowd furniture store. It eventually spread to Clingman Pharmacy and the Fischer Law Firm.

Fischer is setting up shop, for the time being, in an old Department of Human Services Building in Benton County. He’s not sure what he’ll do beyond that. “I just haven’t made any further plans. It’s just hard to get your arms around all of this,” Fischer said.

The cause of the fire remains under investigation.