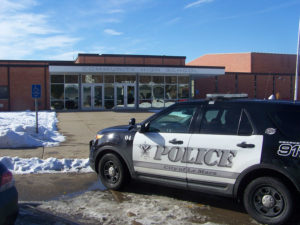 On the same day a mass shooting at a south Florida school took 17 lives and left many injured, a note threatening a shooting was found at a school in northwest Iowa.

“The outcome of that investigation found that a student here at the high school had left the note with the potential threat to harm others,” Chief Vande Vegte says. “It was found that at no time was any student, anybody in the school, in any danger of any sort.” The situation was resolved in a little over an hour.

“We were able to narrow down a potential suspect that had left the note,” he says, “and ultimately got a confession from that individual to reassure the public that the school was safe and none of the kids were in any harm whatsoever.” A 14-year-old student was taken into custody. The chief praised school administrators for taking quick and appropriate action.

Vande Vegte says, “Security measures are in place in Le Mars schools and the school immediately followed those procedures and went into a lockout mode which means nobody in the school, nobody outside the school.” The incident took place about 1 P.M. and the chief says the timing was very coincidental. 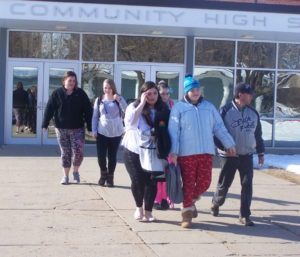 “Luckily, we were about to begin a training session at the police station and I had 14 officers standing there and I sent them to the high school,” Vande Vegte says. “They secured the perimeter. Nobody came in. Nobody came out. That’s the objective of a lockout. If there is a threat inside, officers are outside and they can enter immediately.”

Some parents gathered around the perimeter of the school, concerned about the safety of their children. They were notified of the incident either from social media or cell phone calls and texts. Precautions were also taken around the community.

The unnamed male student was transported to the Le Mars Police Department at about 2:10 P.M. He was later transferred to the juvenile detention center in Cherokee and is charged with threat of terrorism, a class D felony. Classes resumed today as normal.