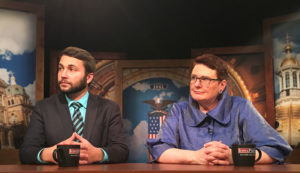 “There’s 3,300 miles of fiber optic cable that the state owns. They service over 1,000…customers with 7,300 accounts. We have a valuable asset. I think the questions is: ‘How can we better utilize it?'” Representative Bobby Kaufmann, a Republican from Wilton, asks.

Kaufmann is chairman of the House Government Oversight Committee. The panel is investigating network operations after an audit revealed the now-fired ICN director misspent $380,000 and hired people who weren’t qualified for their jobs. Representative Vicki Lensing, a Democrat from Iowa City, also serves on the Oversight Committee. Lensing opposed past efforts to sell the state-owned network and her position hasn’t changed.

“They provide great service to cities and counties and schools. And how would we undo that?…Do we have a plan for these users?” Lensing said today. “…We need to education our colleagues as well about what the ICN does.”

Kaufmann indicating leasing the fiber optic lines to cities or counties might be an option, so municipal utilities could use the network to serve far more local customers, “to be able to get fiber optic network out to rural Iowa.”

Lensing said the Iowa National Guard solicited bids from private companies and chose to maintain the state-owned ICN as its telecommunications carrier.

“They thought it was the best fit — the security that they deliver, the service they deliver,” Lensing said. “They must be very satisfied.”

The two legislators made their comments during taping of Iowa Public Television’s “Iowa Press” program that airs tonight at 7:30.