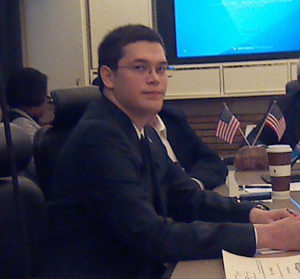 A member of the Woodbury County Board of Supervisors is taking issue with Tuesday’s 3-2 vote to bring back a ban on weapons in the county court building.

Supervisor Mathew Ung has sent a letter to the county attorney asking for a clarifications about what constitutes a conflict of interest when it comes to votes by board members. Ung questions why fellow supervisor Rocky Dewitt was allowed to vote for the ban, and why his job working at the courthouse does not create a conflict of interest.

Ung says Dewitt had declared a conflict of interest in the past on the same issue because he works for Sheriff’s Office which provides courthouse security. “The county attorney has said that is okay. I believe that was an inconsistent application,” Ung says. He says Dewitt should have not been allowed to make other votes in the past because of an obvious conflict of interest.

“It was mentioned to me that an obvious case where there would be a conflict would be if Mr. Dewitt voted on the courthouse security budget which pays his salary. And the fact of the matter is, he has done that for the last two years — and that’s very troubling,” according to Ung. Dewitt says no one has raised any issue with him voting on the budget in the past.

“I’m not going to put the interest of a lobbying group in front of the needs of the county or the safety of my citizens in this county,” Dewitt says.

Dewitt says the county attorney determined his deciding vote on the security issue was not a conflict of interest because it was about policy and not about funding.

He says he hopes his fellow supervisors will move on from the court security issue to other matters of concern for the county.