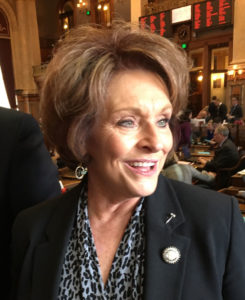 The wide-ranging bill Senate Republicans say would cut Iowans’ taxes by a billion dollars is likely to be debated in the full senate next week. Senator Randy Feenstra, a Republican from Hull, said Thursday that he’s been working on the proposal for a decade.

“This bill creates dramatic economic development and it says we’re open for business,” Feensta said during a Senate Ways and Means Committee meeting.

The bill would cut personal income taxes and corporate taxes. It would raise taxes on the state’s largest credit unions. It would do away with dozens of tax credits.

“We’ll run the process like we do here in the House and make sure Iowans have an opportunity to weigh in,” Upmeyer said.

The governor’s plan does not cut corporate taxes and it would phase in a 23-percent reduction in personal income tax rates over a six year period. There’s also a “trigger” option in the governor’s plan, so the tax cuts wouldn’t go into effect if the state’s financial position takes a dive.

“I think the sustainability of any kind of tax reform and our ability to actually follow through on it — that’s the critical part. If that means triggers, then I think that’s the way to do it,” Upmeyer said. “That’s a model North Carolina used. It worked pretty well for them.”

Republicans in the Senate are calling for immediate tax cuts and their plan does not include a mechanism that would put the cuts on hold if economic conditions warrant. Upmeyer told reporters she’s not had a chance to thoroughly review the tax-cutting plan Senate Republicans are advancing.

“We need the balance sheet,” Upmeyer said. “We need to know more about the bill.”

Democrats in the Iowa Senate say it was unwise for Republicans to advance the bill out of a committee yesterday without first having a non-partisan report on the bill’s impact.