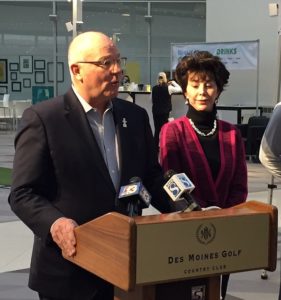 Nine charitable organizations are sharing half of the profits from a record-setting event in central Iowa last summer.

Gregg Carlson served as the 2017 president of Des Moines Golf and Country Club, which hosted the Solheim Cup in August. Carlson says an announcement made this weekend marked the culmination of six years of work. “We were able to put a ribbon on the entire event by coming out with donations of $250,000 to nine different charities in central Iowa,” Carlson said.

The Solheim Cup is a biennial professional women’s golf tournament. Around 120,000 people, a Solheim Cup record, were at Des Moines Golf and Country Club (DMGCC) to watch the best women’s golfers from the United States defeat Europe in match play competition.

A committee, comprised of DMGCC members, chose the charities that will split a-quarter-of-a-million dollars. “The charities (are) all focused on serving causes related to women and children’s needs here in central Iowa,” Carlson said. 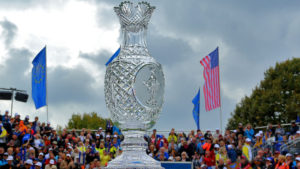 The nonprofits benefitting from the donation include the Boys and Girls Club of Central Iowa, the Children’s Cancer Connection, Iowa Homeless Youth Centers, and Youth Emergency Services & Shelter.

Other nonprofit charities were presented with a combined $154,000 before and during the Solheim Cup. “So, our total (charitable donations) is actually over $400,000,” Carlson noted.

According to Carlson, the Solheim Cup, held last August 14-20, pumped more than $34 million into the Des Moines area economy. Local charities will now share in the community’s support of the event.

The first Solheim Cup was held in 1990. “We’re the first club to really do this with the Solheim Cup – to donate a major share of its profits,” Carlson said. “We’re really proud of that.”

The 2019 Solheim Cup will take place in Perthshire, Scotland.