You are here: Home / Education / Clinton to open international school for Chinese students 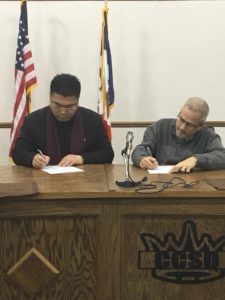 An eastern Iowa town will host an international school. An agreement was signed last night between the Clinton School Board and the Confucius International Education Group.

The China-based group will bring 72 students to Clinton next academic year. They will pay the Clinton School District the state aid rate of about $6,700 a year per student.

Clinton School Superintendent Gary DeLacy says there will be no cost to the public.

“There is not one penny that will be levied,” DeLacy says. “This is all tuition then, so there will be absolutely no expense to the taxpayers.”

The Chinese group will use the vacant Mount Saint Clare Campus as a base for the students’ housing and courses. They will attend Clinton High School in addition to taking other classes at the campus. Clinton students may also attend some courses at the campus, especially in the science lab area.

Kong Lingtao, founder of Confucius International, told the board wherever he has a school, he calls it home. Speaking through an interpreter, Kong said he also hopes to establish a university at the site.

“At that time I will be proud to say I am one of Clinton’s citizens,” Kong says. The group has several other international schools but this is the first in the U.S. for the organization. 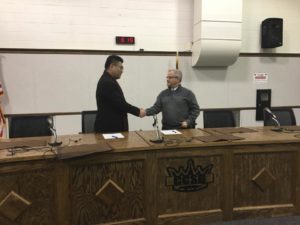 The international students will be freshmen, sophomores and juniors. Kong first visited Iowa several years ago when he received an award from then-Governor Terry Branstad.

Clinton Catalyst, the owner of the campus location, has an agreement with the city for property tax breaks based on an increasing number of students and employees from the international education group.