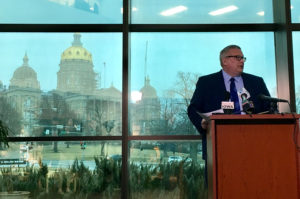 Bill Northey this morning said serving as Iowa’s Secretary of Agriculture for the past 11 years has been “the job of a lifetime,” but he’s ready for his new role in the federal government.

Northey will be sworn in tomorrow  evening as an undersecretary in the U.S. Ag Secretary.

“I’m told my first couple of weeks on the job will be briefings, so I’ll have a lot to learn,” Northey said. “…I don’t know what the cotton program impact is, the challenges and the opportunities and the needs within the diary support program. There are a lot of pieces that I will need to learn.”

Northey is resigning at 1:30 p.m. today and his replacement will be sworn in half an hour later. U.S. Ag Secretary Sonny Perdue is flying to Des Moines tomorrow evening for the sixth annual ag leaders dinner at the state fairgrounds. That’s where a ceremony will be staged for Northey to take his oath to serve as a top administrator  in the U.S.D.A.

Northey told reporters this morning Perdue has made it clear improving “customer service” within the USDA is the priority.

Northey’s title will be undersecretary for farm and foreign agricultural services. He’ll oversee a staff of 20,000. Northey held a news conference this morning to discuss the challenges he faced as Iowa’s ag secretary and what may be ahead for him in D.C.

“This is one of the best jobs I could ever imagine,” Northey said. “I’m sure there may be some times in the future I’ll say: ‘Why did I leave that job up? Why did I leave to go some place else?’ Because it is a great job, a chance to be able to work with Iowans and work on this that we care about.”

Northey’s morning news conference in Des Moines was just steps away from his office in the Iowa Department of Agriculture, across the street from the state capitol.

Northey’s deputy, Mike Naig, will be sworn in as Northey’s replacement at 2 p.m. Northey did not endorse Naig, who is seeking a full-term in the job. Naig will face a handful of other Republicans. Northey hinted to reporters he’ll endorse Naig, though, later. Northey indicated it will happen when he’s not speaking in his official capacity as state ag secretary or as a federal official.