You are here: Home / Recreation / Entertainment / Get out the clubs, golf courses across Iowa opening up 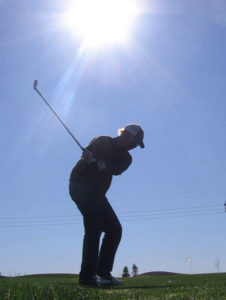 Golf courses are starting to open for the season and many of the clubs across Iowa are hoping to retain members and attract new ones.

Some public courses are struggling to stay in operation as young adults, especially those starting families, find they simply don’t have time for the sport. Chad Pitts, executive director of the Iowa Golf Association, says many people take a long break from golf during their lifespan.

“They play up until they get married and start having kids, then they take a break from golf because their kids’ activities kind of take over,” Pitts says. “Then, they come back to the game later in life.” The standard round of golf involves 18 holes, but Iowa has more nine-hole style golf courses than any state in the country.

Pitts suggests golf course managers promote the “play nine” concept as way to drum-up business. “So, in other words, don’t think of a round of golf as – it’s going to take you five or six hours. Maybe you can go out and just play nine holes, it’s only going to take you two hours, and you can do it after work,” Pitts says. Iowa has around 390 golf courses, including 340 that are open to the general public. That’s down from 415 total golf courses in 2006. Pitts says there was a “boom” in new golf courses in the 1990s and early 2000s. Since then, there’s been a “market correction,” according to Pitts.

“Golf got overbuilt, for sure, and it’s kind of correcting itself now,” Pitts says. In addition to the time factor, many people who step away from golf cite financial reasons. A season pass to a public course in Iowa can range from roughly $500 to $3,000. Pitts notes operators of some Iowa golf courses get creative by offering lower prices for green fees during non-peak playing times or even allow golfers to play just 3 holes for a few dollars.

The Iowa Golf Association, a nonprofit group, is launching a program this summer called “Youth on Course.” Pitts says it’s designed to attract young people to the game by subsidizing their round of golf. Kids will pay just $5 at courses that sign up for the program.

“So, we’re hoping it’ll definitely be a win-win. We can build new golfers for the future – get kids out there playing early in life, but also bring in some business to our member clubs (at times) when they aren’t getting any right now,” Pitts says. While the number of golf facilities in Iowa has declined, more people are joining the Iowa Golf Association.