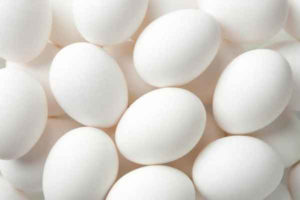 Whatever their religious beliefs, many thousands of Iowans enjoy coloring, decorating, hiding and eating eggs on the Easter holiday — but egg prices have cracked the $2 mark in recent weeks and it’s no yolk.

Shayle Shagam is a livestock analyst for the U.S.D.A. and says wholesale prices on eggs are up significantly from last Easter. “They’re running about $2.27 a dozen compared to about 94-cents a dozen last year,” Shagam says. “Easter is coming a couple of weeks earlier this year so you’ve pushed that normal demand period forward somewhat.”

“The average price per dozen is now $1.76,” Kuhns says. Shagam says egg production has increased, but demand is coming sooner than usual, which is forcing producers to change up their schedules.

“You would tend to bring on young chickens and you would tend to keep some of your older chickens,” Shagam says. “Both of those are probably not going to be at their optimal rate of lay and to some extent, that could be providing a little bit of a constraint on the production of eggs.” Shagam says if you shop around, you’ll likely find egg specials. Also, he notes prices will likely fall after Sunday, once demand drops.