You are here: Home / News / Corbett says petition failure will haunt him, but he’s moving on (AUDIO) 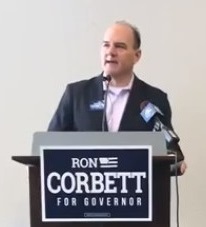 Former Cedar Rapids Mayor Ron Corbett officially ended his Republican campaign for governor this morning. A judge refused to order Corbett’s name be placed on the Republican Primary ballot. The judge sided with a state panel that ruled last week Corbett fell eight signatures short of what he needed on his nominating petitions.

“We didn’t have some of the staff that some of the campaigns do, so it’s something that I guess will haunt me for the balance of my life, why we came eight short,” Corbett said, “but that’s it.”

Corbett plans to issue partial refunds to donors from what’s left in his campaign treasury.

“Although I’m not a happy Republican today, I’m still a Republican and will not be running as an independent,” Corbett told reporters in a conference call this morning.

AUDIO of Corbett speaking with reporters, 12:00

Corbett said Governor Kim Reynolds has not spoken with him, but Corbett says he has no “ill will” toward her and is backing her candidacy.

“Governor Reynolds and I both share a great passion for the state of Iowa,” Corbett said. “She’s the most conservative candidate left in the race and I’ll be supporting her.”

Corbett said if he can’t raise the money to keep his Engage Iowa “think tank” operating, he’ll dust off his resume and seek a job in the private sector. Corbett has been critical of what he calls the GOP “establishment” and special interests.

“I left partisan politics back in 1999 and things have changed a little bit in the last 19 years,” Corbett said. “…If speaking up and trying to represent people is damaging my reputation, then so be it. I’m going to continue to speak up for people as I did as mayor of Cedar Rapids and as I did during my time in the legislature.”

Corbett served two terms as Cedar Rapids mayor. He’d previously served in the state legislature, rising to the position of Speaker of the House in the late 1990s. Corbett left that post to lead the Cedar Rapids Area Chamber of Commerce.

Governor Kim Reynolds issued a written statement, saying it’s time for the Republican Party to unite. The Iowa GOP’s chairman issued a statement, too, saying Corbett’s commitment to the conservative movement made the party stronger.

“I want to thank Ron Corbett for his commitment and service to the people of Iowa. Now is the time for the Republican Party to unite and I look forward to leading our team to victory up and down the ballot this November. My campaign will focus on building a better Iowa so that every Iowan can live in a state with endless opportunity.”

“We’re putting our full support behind Governor Kim Reynolds’ campaign to continue moving Iowa forward. Under Governor Reynolds’ leadership, Iowa is the best state in the nation, and she has the leadership, vision, and resolve needed to make our state even better than it is today. There is no one in this race more committed to Iowans and their future than our Governor. In 2016, Republican unity led us to victory, and by uniting behind Governor Reynolds, we’re once again in a strong position for victory this November.

“I want to commend former Cedar Rapids Mayor Ron Corbett for running a hard-fought campaign. His commitment to the conservative movement in Iowa has made our party stronger. We’re fortunate to have had a Republican at the helm of Iowa’s second largest city and for his service in the state legislature. We hope that Ron Corbett will remain an active voice for the party and look forward to working with him in the future.”