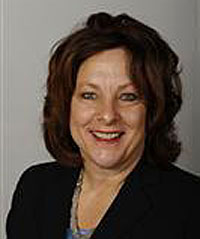 A Republican woman has won the state senate seat that’s been vacant for a month — ever since a married male senator resigned shortly after an online video showed him kissing a lobbyist.

“I am just so proud of our team that we had, when we only had two weeks to get this done. Everybody helped so much,” Sweeney told Radio Iowa. “It’s just overwhelming, all the hard work that everybody did.”

The state senate district covers all of Grundy and Hardin Counties as well as portions of Butler and Story Counties and has a roughly two-to-one voter registration edge for Republicans. Unofficial results indicate Sweeney won by 12 points over Democrat Tracey Freese of Dike.

Voter turn-out was stronger than normal in a special election.

“Even the absentee ballots were higher than expected, too,” Sweeney said.

Sweeney told Radio Iowa the voters she talked with didn’t have much to say about the senator she’s now replacing and the drama surrounding his exit from the legislature.

“The voters, when we visited, they wanted somebody to get back down to the capitol,” Sweeney said, adding that even in the Butler County area where Dix is from, voters told her they were ready for a “fresh start.”

Sweeney recently had been appointed by President Trump to serve as state director of rural development for the U.S. Department of Agriculture, but she resigned from that post to have another shot at serving in the legislature. Sweeney was a two-term member of the Iowa House, but lost a GOP Primary to Pat Grassley in 2012. The two were thrown into the same district once new maps were drawn after the 2010 census. Sweeney is jubilant about joining the state senate.

“To be able to visit with people and take their concerns, their ideas down to the statehouse and make a difference for Iowans, that’s what really excites me,” Sweeney said shortly after the special election results were posted online.

The county boards of supervisors in Butler, Grundy, Hardin and Story Counties will have to review the special election results in Senate District 25 and confirm Sweeney as the winner. She expects to be sworn in as the newest state senator sometime next week.