You are here: Home / Business / State grants awarded to 18 towns to help make old buildings a catalyst for new development 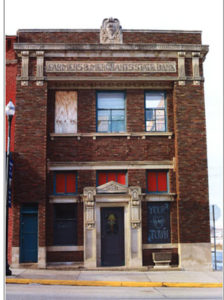 This bank building in Cascade is one of the projects.

Eighteen Iowa communities are getting grants of $100,000 from the Iowa Economic Development Authority to redevelopment of buildings under the Community Catalyst Program. Jim Thompson oversees the new program which has a simple goal.

“Communities select a building that’s in need of remediation that will not only serve as an economic catalyst — thus the name — but also serve as an example to other property owners that are adjacent. To be able to see that economic activity can happen, even in the smallest of towns,” Thompson says. The program is open to all communities, but the rules require 40 percent of the grants to go to those with populations of less than 15-hundred residents. Fifty percent of those size communities that won grants in this first year.

“Smaller communities have less capacity,” Thompson says, “and it’s not just always in dollars. Sometimes it’s in administrative function and in leadership. So, we have been really working hand-in-hand with these communities as applicants for these buildings.” Fifty-three communities applied for the program and 18 received the maximum $100,000 award.

“One unique thing about this program is that it did not require any local match — although it was scored competitively against the other applicants based on their match,” Thompson says. “So, it didn’t’ have to be just a cash match. We also allowed communities to come up with an in kind contribution.” He says communities provided the in-kind match in a lot of ways, such as waiving building and other permit fees.

He says they allowed the communities to be creative and some are supplying trucks and labor to help renovate the buildings. Thompson says some of the projects are already in the works and are paying off.

“I look at a project like the city of Pocahontas. They had a vacant Odfellows building and they were able to recruit a dentist on the first floor in a downtown location and they are actually going to improve all floors of the office building and they are actually going to be able to serve patients right in their downtown location,” Thompson says. He says the program saves old buildings that may’ve been torn down and turns them into something that creates new things.

“We really did look at preservation as an economic development tool. So, we wanted these projects remediated in a way that was appropriate to the building and to the downtown,” according to Thompson. “And when you do that and can make them economically feasible — boy it makes a great example in a community.” The communities have two years to complete the projects.

Here are the projects and their total costs: