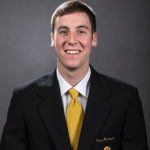 Iowa basketball coach Fran McCaffery announced that freshman Connor McCaffery has been rewarded with a scholarship beginning with the 2018-19 academic year. McCaffery has four years of men’s basketball eligibility remaining after his hardship waiver petition was approved by the Big Ten Conference last month.

“Connor went through a lot his freshman season, but remained positive despite suffering physical and health setbacks,” said McCaffery. “Although he did not play in many games last season, he was an important part of this team on and off the court and will continue to be the next four years. The coaching staff and I agreed that Connor has earned this scholarship and we look forward to his contributions the next four years.”

McCaffery was hampered by an injury and multiple health setbacks throughout his freshman season, playing limited minutes in only four games.