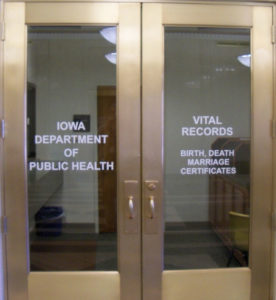 There’s another chance for those who want to get into Iowa’s new medical marijuana business to get a license to make the product.

Iowa Department of Public Health Deputy Director Sarah Reisetter says the law does allow two licenses to manufacture.  There were nine companies that showed interest the first time around — but only one followed through.

“We did follow up with some of them after the fact to find out and see why they decided not to apply,” Reisetter says. “During the course of some of those conversations and based on contacts that we’ve received consistently since that happened, we are pretty confident that there is still interest in another manufacturing license in Iowa, so we decided to proceed.”

The sole license to produce medical marijuana products was awarded to MedPharm Iowa in November. Reisetter says things happened pretty quickly after the law was passed and that was part of the reason some of the companies didn’t follow through in the fall. She says the companies need to get support from the community where they plan to build the production facility and there was not a lot of time for that to happen.

There are still a little more than 300 people who have gotten the cards needed to buy the cannibas oil products. Reisetter isn’t concerned that might keep another company from wanting to jump into the business. Reisetter says one of the things she learned from potential applicants who had experience in other states is that they are betting on the program expanding. She says MedPharm officials have said that as well. “While the patient pool is small right now we do anticipate it to grow as we get closer…to when the products are actually available in the state.”

Reisetter says if a second company is selected,  they would face the same timeline as MedPharm. “MedPharm was licensed December 1st of 2017 and they have until December 1st of 2018 so our second manufacturer will also have a year to get up and running,” Reisetter explains. The new license is expected to be awarded July 1st, and that would put the deadline for the second manufacturer to be running on July 1st of 2019. She says that company can begin making products as soon as it has the plant built and met all the requirements.

“It will be in their best interest to get things up and running as quickly as possible I think in terms of a competitive marketplace,” Reisetter says. MedPharm has the advantage of the being the first to produce products for the five state-licensed dispensaries. Reisetter says the state understands the jump start MedPharm has right now on a new production company.

“One of those things that we do have in those regulations for dispensaries is that dispensaries in our state are going to be required to make available products from both manufacturers,” according to Reisetter. “So we did adopt a regulation to try to account for that a little bit.”

Businesses have until May 16th to notify the state of their intent to apply for a medical marijuana license. Formal applications will be due by May 31st.