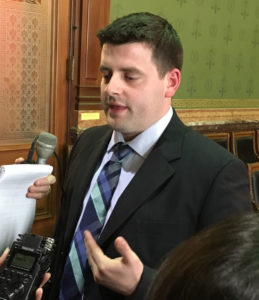 Republicans in the Iowa House have unveiled a plan to increase spending by more than three percent for the next state budgeting year.

Republican Representative Pat Grassley of New Hartford suggests the plan’s overall $7.4 billion spending target is similar to what Senate Republicans have in mind.

“As far as the size of the pie would be, I would say we’re fairly close in those conversation and it just really is getting down to this point in the session, we need to get things moving,” Grassley told reporters yesterday.

There is no limit on how long an Iowa legislative session may last, but this is the 100th day of the 2018 and the final day members of the House and Senate get daily expense money. Jack Whitver, the Republican leader in the Iowa Senate, said he’s optimistic Republicans in the Senate and House are close to striking a final deal.

“Hopefully in the next few days we can get to some agreement on taxes and then we can get moving on the budget,” Whitver told reporters.

Yesterday, Governor Reynolds said she is not making any public demands about what her fellow Republicans in the legislature should include in their tax bill. Democrats like Senator Joe Bolkcom say the state is “flat broke” and cannot afford to cut taxes.