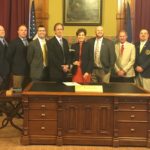 A group of golfers joined Governor Kim Reynolds to highlight the economic impact of golfing on the Iowa economy. According to a 2015 study, more than 11-thousand people have jobs at Iowa golf courses and golfing has an 800-million dollar impact – either directly or indirectly — on the state’s economy.

“We have the most 9-hole courses of any state and then, per capita, we’re almost always in the top five.” said Chad Pitts, executive director of the Iowa Golf Association.

Pitts says the percentage of Iowans who golf may rise more — inspired by the professional women golfers from the U.S. and Europe who competed in last year’s Solheim Cup at the Des Moines Golf and Country Club.

“Where I would expect to see the change is women playing golf, for sure,” added Pitts . “I know they broke attendance records and TV viewership.”

Pitts and eight other leaders in Iowa’s golfing community posed for a photo with Governor Reynolds in her formal statehouse office Thursday morning.