You are here: Home / Education / DMACC offers free class to high school girls to get them interested in firefighting, EMS 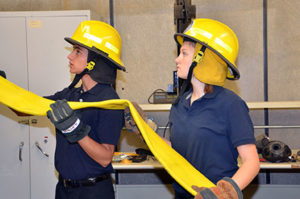 Students in fire training at DMACC.

Des Moines Area Community College (DMACC) in Ankeny is offering a free class to high school girls in tenth through 12th grade to learn about being a firefighter or in Emergency Medical Services.

The chair of the DMACC Fire Service/Paramedic program, Dewey Anderson, says the four-hour class will be hands-on. “We have a fire truck out here, we are going to have them learn about the different parts of firefighting. We also will have our DMACC ambulance there and they will learn about Emergency Medical Services and hopefully generate some excitement,” Anderson says.

He says firefighting is a profession that has been dominated by men, but they are trying to show women there’s a place for them too. “I think for a lot of years it was viewed as you have to be big and burly and manly to do this type of work. But really….you do have to be in shape, but you have to have some smarts. You have to understand the concepts of what goes into firefighting,” Anderson says.

He says the methods have changed through the years. “There’s a lot of science behind firefighting — it isn’t just riding the fire truck and throwing some water on the fire.You have to know different things such as what type of fire you are fighting and how to fight it. You have to know how to hook up hydrants, you have to know how to don protective gear correctly. All of that stuff goes into being a firefighter,” according to Anderson. “It’s really technical, it’s changed over the years and it’s a lot more technical. I  am hoping that some of these girls will get excited enough about the whole process to be able to consider that as a career.”

He says there are many women in rural volunteer fire departments, but metro departments have lagged behind. Anderson says they want to see more women in their program. “We have maybe one or two a year that go through the fire science program here at DMAAC. I’ll tell you they can get jobs very easily once they graduate. That’s the word we are trying to get out also — get you associate’s degree in fire science and you can get a good paying job once you complete the program,” Anderson says.

You can find out more about the program online at: www.dmacc.edu/careerdiscovery. Or you can call Dewey Anderson at 515-965-7051 to discuss the class and program.