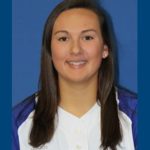 For the fifth consecutive week, Drake University softball redshirt junior Nicole Newman has been selected the Missouri Valley Conference Pitcher of the Week, the MVC office announced Monday, April 23. Newman has won a league-best seven MVC Pitcher of the Week awards this season and 12 in her career.

In three starts last week, Newman went 3-0 with three shutouts for Drake, which went 5-0. She pitched 20.0 innings, scattered 12 hits and finished with 23 strikeouts to just one walk. Newman, who has thrown a pair of no-hitters this season, tossed her fifth one-hitter of the season in the team’s first win over Illinois State.

Newman, who holds an impressive 16-2 record in the circle this year, lowered her earned run average to 0.44, a mark that leads the country. She has yet to allow a run by an MVC opponent, holds a 9-0 record against league opponents and has 109 strikeouts with just eight walks in MVC play.