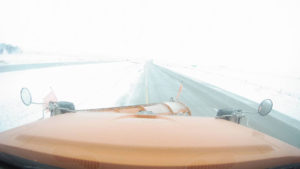 A DOT snowplow camera view of Highway 20 near Fort Dodge.

Warm spring weather has been slow to spread across Iowa and the rest of the Northern Plains, causing costly delays for planting, construction and other outdoor activities.

Meteorologist Dennis Todey , director of the U.S.D.A.’s Midwest Climate Hub, says changes are underway in the major climate drivers. “We are transitioning between La Nina and potential El Nino, so, a large part of what you’re seeing here is trapped,” Todey says. “There is this noted warming hole over the middle part of the country in the middle part of summer, so that’s what is coming into play here.”

La Nina patterns often bring cooler temperatures along with more storms in some areas and droughts elsewhere. El Nino patterns typically do the opposite. Due to the extended cold weather, many Iowa farmers are a couple of weeks behind in planting and Todey says it will take quite a while to get back to normal growing conditions.

“The catching up cannot happen during the early part of the summer,” he says. “Above-average temperatures, middle part of the summer don’t do much to catch us up in the way of growing degree days.” Todey says there is no single cause for the prolonged winter we’ve seen across much of the region in recent weeks.

“There is a little bit of La Nina influence still because we still are in La Nina,” he says, “but there’s not one indicator. There’s a combination of several different things that has locked into it.”

Many areas in the region have set all-time April records for snow and cold temperatures. The Midwest Climate Hub is based in Ames.